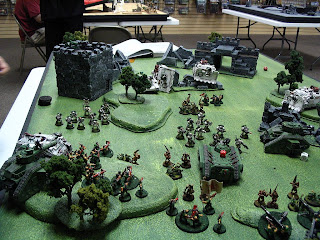 I played a 2000 point cleanse mission against Bigred from BOLS last Thursday using my imperial guard army. He was trying out for the first time his updated 2k death guard list, featuring a nurgle bike lord, three squads of 10 plaguemarines, five squads of 6 lesser demons, and three vindicators. In other words, a tar pit and a half. I knew going in that the bike lord and all the demons he would be able to summon were going to be my main threat. And I was right. I was able to destroy the vindicators fairly easily in the first two turns, but just as I feared, the bike lord pulled up in right front of my gun line in the second turn and started pooping out demons, who in turn began assaulting my squads immediately, tying up their guns and clogging up valuable LOS lanes for everyone behind them. And in case you're wondering, yes, red's mix of nurglings and plaguebearer bases does indeed extend his potential summoning turn charge. I was eventually able to kill a bunch of them with tank shooting, but the wave of plaguemarines following them wiped out just about everything I had. In the end, we both held an adjacent quarter and each other's home quarter (I managed to land grab with some deep-striking vets and a sentinel), but he swamped me with victory points from all the inflicted casualties. A loss for the Tiefwalders, but nevertheless it was a fun game with a very agreeable opponent.

The game pretty well summed up the main issues I have with my guard army. It's great for putting out tons of fire, and has a few fun little tricks, but if a few infantry units get pulled into assault, it's pretty much over. Consolidation and massacre moves allow enemies to get deeper and deeper into my lines, until they're eventually close enough to melta my tanks. Any squads that try to move away from the frays lose their shooting and they can't ever move far enough away to escape assault themselves in subsequent turns. It's a good army in the first couple of turns but gets shitty late-game, especially against any assault-themed force with a decent amount of intervening terrain. Next game I'm going to try using an eversor (and the requisite cheap inquisitor) for counterassault. Maybe down the line I'll be able to make those piggy rough riders and be able to go back to a pure guard force again.
Posted by bullymike at 6:59 PM

I want to know how it turned out.

yeah sorry its taking so long. i already wrote it up but the disk has been in a drawer at work but I've been working out of the office this week. it should be up by lunch tomorrow. in the meantime...

I run a similar gunline/drop troop IG army, and lately I've been trying out the Inquisitor for the Psychic Hood and an assassin for counter assault... the Eversor will break your heart. YMMV, but he never lives up to the potential that looks great on paper. I've actually had success with the Calidus. Expensive, but worth it. Not only are its abilities extremely powerful, but often force your opponent to change strategies and execution. It's amazing how useful it is simply in putting your opponent off-kilter.

i've played with the callidus before in my witch hunters army. usually the better opponents have enough redundancies to make "word in your ear" not worth the extra points, and even if she does ignore saves she's much less effective in CC than the eversor. it's a cool unit but i've enjoyed the d6 extra 4+ wounding power weapon attacks much more than her sneakiness. i bet we could agree that they're both better than the vindicare, in any case!

Nice report. I was wondering how Bigred's army faired... I am thinking of making one similar but with more T6 Bikes.

haha... you and your piggies. As they say in Arkansas... wuuuuuuu Pig Suey!