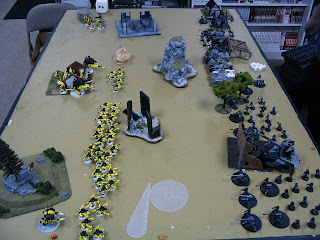 Last night I threw down with Clay at Ninja Pirates in a 2000 point take and hold match. I used my latest bug list: 36 scuttling carapace genestealers, 6 flying CC warriors, dakkarant, dakka fex, lictor, 2 sniperfexes, and blast/scream zoanthropes. He was playing a big guard gunline army, with a high Ld CHQ with vox, a few heavy weapon squads (autocannons and missile launchers), a squad of ogryns in a chimera, two platoons with three infantry squads each (with autocannon teams), two hellhounds, two HB/LC leman russes, and a basilisk. He rolled to pick his deployment as well as to go first. 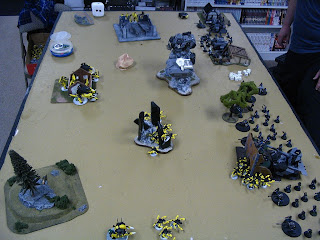 After the genestealer squads scuttled forward towards their lines, Clay's guardsmen loosed their heavy guns and tried to squash as many bugs as possible. Several different stealer squads, one sniperfex, and the dakkafex all took wounds from mass ordnance, rockets and autocannon fire. His hellhounds moved forward into the center piece of terrain, one of them burning up an entire stealer squad in great one gout of flame. The ogryn taxi moved up as well. In my turn, all the remaining stealers moved up, hiding in terrain whenever possible, and thanks to a six inch fleet move, a squad of six made it into combat with one of the fire support squads. A predictable amount of bloodshed ensued, and they consolidated into a nearby missile launcher squad. The hive tyrant and winged warriors jumped to face the right guard flank, the tyrant's devourers bringing down the senior officer and three of his attendants, leaving the commissar in charge. The sniperfexes and zoanthropes stunned one of the hellhounds and destroyed the other, leaving it stranded in the center terrain. A damn fine first turn for me! I had managed to turn down the heat some (literally), hurt the command HQ a little bit, and tied up most of his left flank. 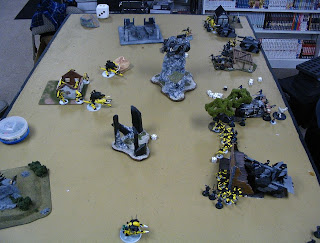 In his second turn, Clay pulled the ogryns back to support the center of his line, and finished off the last two stragglers from one of the genestealer squads. He also reduced the stealer squad on my far right to a single man. Then he charged into the melee in progress on his left with one of the nearby infantry squads. With their high initiative, the genestealers broke the missile launcher squad and hacked apart most of the infantry that had just charged them. In my turn, the sniperfexes destroyed the chimera with a glancing 6 from a venom cannon and entangled the passengers. After some unlucky armor save rolls, one of the ogrys died in the explosion, another took two wounds, and the commissar also took a wound. The lictor emerged from a shed in the middle of his gunline and assaulted a nearby infantry squad, only killing one or two before taking a wound himself. The hive tyrant dealt heavy casualties to a missile launcher squad, sending the survivors fleeing for the hills. The flying warriors jumped into assault with a squad of guardsmen but was only able to kill a few of them. The zoanthropes tried to finish off the hellhound in the middle to no avail, only managing to stun it once more. Another stealer squad charged his center left, tying up two infantry squads and killing four men from each unit. The last surviving black-headed stealer on my right was finally made it into assault with an infantry squad as well, but was knocked in the head with a rifle butt and killed after his own swings went wide. Things just kept getting better for the bugs, and we decided to tentatively play out a third turn to see if the guard could turn things around...

They couldn't. It was too late, and his subsequent guardsmen charges into my genestealer units were mostly ineffective. He managed to bring down one of the flying warriors with his commissar, and a command squad helped infantry squad remnants kill off the lictor, but I had dug pretty deep into his lines and we decided to call it as an inevitable victory for the bugs.

This game was probably more fun for me, but there were some great misadventures on both sides. I liked fielding a strong flank with the genestealers - it worked much better than spreading them out across the entire table. The warriors were about as strong as I expected, in other words not that strong, but I thought the one squad definitely served its purpose by supporting the zopes and sniperfexes in the middle, providing synapse and counterassault if necessary. The hive tyrant did well against guard, even with a lower BS than usual; we'll see if the good results can be repeated against marines. I think the most important thing was keeping the stealers away from the leman russes. Even if he destroyed four of the six squads, it only took the two stealer units that made it across the board to wipe out all the infantry on his left flank.
Posted by bullymike at 1:28 PM

I would be interested in some more of your observations on what went well (aside from the random chances here and there) for both sides. Do you think your game turned out the way it did because of either side's setup, tactics or something else? How about the lists...it seems like your buddy's list is a pretty straight forward IG list...were there other choices he could have made, or that you would have made if you were him?

Thanks, and I really enjoy the site!

hey, thanks for dropping by. in this particular game i thought the autocannons were going to chew me up much more than they did - and though i was using terrain for cover and LOS screens, they probably should have. they're actually a decent choice against an army full of carapace genestealers. unfortunately he rolled fairly poorly in the early game.

the guard list: in my own guard army i personally prefer more heavy bolters and las/plas. i also don't think upgrading the CHQ to a senior or heroic senior officers is worth it, nor are the voxes - he didn't have voxes in the squads so i'm not exactly sure what purpose they serve in the army. maybe he can chime in? still i got the impression that when it was available, the unit in need usually held. i find a company standard and iron discipline helps to manage ld more thoroughly and dependably and i'm almost certain it's cheaper. clay uses more infantry than me, which is probably a good idea, i just personally like using as many tanks as i have in my collection.

tactics-wise, i think he could have squeezed more of his force into one side, specifically away from wherever the stealers were massing. the longer you can make them run the better. the hellhounds were the best tools he had for killing stealers - i love those tanks. he may not have realized all the high S guns i had in the middle could shut down both tanks so easily or else he might not have moved them into the center piece like that. rather than charging in with any nearby squads as he did whenever stealers caught one of his units, he might have moved them farther away, even towards my own lines or towards the center objective, to try and shoot or tie up other units.

timing things can get very tricky, and i'm still learning the art, but the best chance guard has is to get good early shooting, try to feed the beast a little, use Ld tricks to catch victorious skirmishers out of assault, and shoot them again whenever possible, focussing on wiping out whole units. i might have tried keeping the heavy weapon squads in the rear, moving up with a line of cheap infantry, doubletap flashlights if possible, and try and catch stealers in the open on my own turn with the HW squads after the inevitable slaughter. also if you put your bait out far into the open it reduces the chances that attackers will duck back behind cover with a massacre move. these are just a few ideas, but honestly i don't think i could have done much better in the end. i have my own problems with guard against assault-focused armies.

Hey Mike, missed you on Sunday for the tournie at Ninja Pirate. I ended up taking first and started a blog talking about reports and games etc. Check it out at http://goatboy40k.blogspot.com/

Searching for the Ultimate Dating Site? Join and find your perfect date.