Thanks to Bigred from BOLS for taking these great pictures of my imperial guard army. There's a powerfist captain, a commissar, and a few spare special and heavy weapon troopers not pictured but this is essentially the whole shebang. Here's some tournament fluff I've written for them in the past. 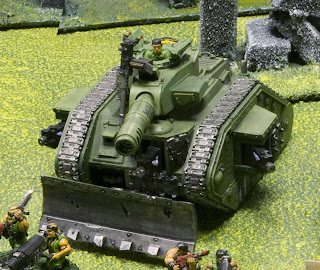 I started this army in 1997 with a Leman Russ bought in a dark and dusty game store, whose name I forget, in Gulfport, Mississippi. Up to that point, I had bought two squad boxes of the metal cadians and 20 or so of the pre-2nd edition plastic guard models, but hadn't really committed to the idea of collecting guard until I started working on the russ. Putting that first tank together was pure joy, except for the stupid track pieces of course. First it had a couple of heavy bolter sponsons and a hull-mounted lascannon. Over the years, I came back many times to update its loadout and appearance through the two codices. Now it rolls out with hull and sponson heavy bolters, a pintle heavy stubber, extra armor, and a dozer blade. I used only a little of the ridiculous amount of leftover track pieces you get in the kits to make the extra armor on all my tanks. The hull heavy bolter, by the way, is a spare sponson from the demolisher tank. If I remember right, you have to kind of trim down the little knob on the top that normally fits into the sponson tops. I don't know who wrote "suck it" on the barrel - I just woke up one morning and it was there. What a mystery. 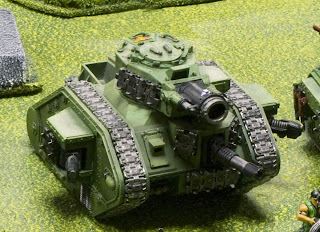 I can definitely see the merits of having multiple standard russes, but it didn't strike me as varied enough to be interesting, so I bought a demolisher for my second main battle tank. I go back and forth on including the plasma sponsons. Over the past few days I've been considering giving it three heavy bolters and a stubber as well. If I'm not always going to be in range for the heavy ordnance, I might as well be blazing away with the dakka on the move. I don't have the book in front of me, but I think the points exchange would be even-steven at worst. At best it might give me a few more points with which to play around. 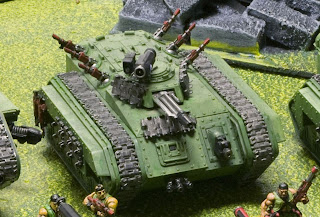 This is one of my two chimeras. Your standard armored transport, only mine have plastic catachan lasguns swapped in for the hideous and way outdated hull-mounted ones that come with the model. Also my versions of the tank are pronounced "shai-merrahs." Right now the models have hunterkiller missile launchers, but soon they too will have pintle heavy stubbers. Again, love that dakka. 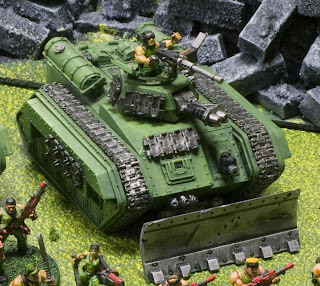 The Hellhound was the last tank I bought for this army. It too is rocking a stubber and a dozer blade. I know a few folks that consider them wastes of points, but I love my dozer blades. They have saved me from what would have been silly and game-blowing immobilizations on numerous clutch occasions. Recently, though, they seem to be crapping out; I've rolled the dreaded double-one twice in as many games and it wasn't exactly convenient timing in either instance. Other than the standard russ, this is probably my favorite tank. 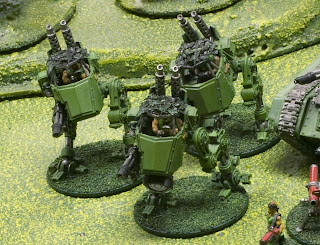 My sentinels are also later additions to my guard force. I installed magnets in mine at the head/waist joint as well as on their right sides for the gun mount. They've gone out equipped with lascannons, autocannons, and most recently, multilasers. I've had about equal success with each. One of my doctrines is drop troops, and recently I've been holding at least one of the sentinels in reserve to help with last second objective grabs. It works pretty well in conjunction with the veterans. 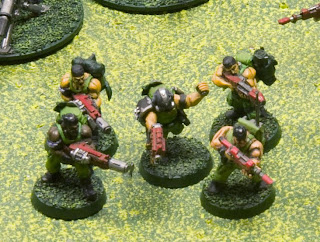 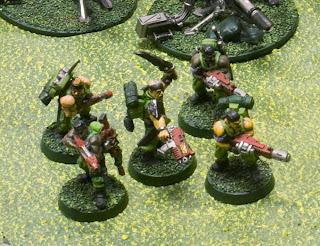 I gave all my vets backpacks just to make them all consistent and able to be picked out from the other cannon fodder. The centerpieces of the veteran units are the sergeants. The great thing about collecting several factions is that you can use all the leftover bitz from one army to make trophies for veteran troopers in another. One of the sergeants is a veteran of battles with splinter fleet Vivax, while the other has campaign experience battling the black legion marauders led by the demon prince Toggog. Given the propensity of Guard infantry to die before the game is even half over, it's most likely that their experience consisted of hiding really well and picking up stuff off of dead enemies after the tanks and artillery blew everything away. Appropriate then that they should lead noble suicide squads deep into enemy territory and wait patiently in ambush for vehicles or elite infantry to pass by before jumping out and blasting away with their anti-armor firepower. Half the time they scatter into their targets or other neightbors. When this happens, I just sigh and envision their being hidden so well that they got themselves run'd over. 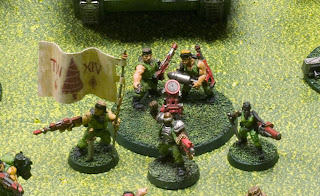 My command HQ has always been led by the bald catachan captain with the cigar and cool carapace armor. I prefer using the junior variety of officer, straight up with just a bolter, and to me the only good guard powerfist is a hidden one, so I will attach a commissar to the unit from time to time and give them all hardened fighters to send them on counter-assault duty. I wrote about the standard bearer in my very first post. I'm still experimenting a bit with the construction of this unit - the various pros and cons of including a heavy weapon (or just giving them a mortar). Firing off a round with the mortar gives you a little edge for correctly ranging subsequent indirect basilisk fire. 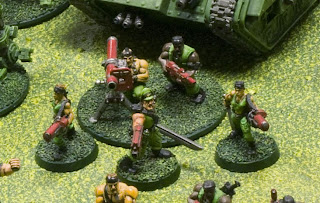 Here's one of my two platoon command squads. The junior officer head is from the most recent tank accessory sprue. The one pictured is probably my favorite of the two. I typically give all the command and infantry squads missile launchers. Against certain MEQ variants these can really bring the pain, but they still all miss half the time!

I got a 20-man catachan squad box and a few metals after painting up the metal cadians. The old pre-2nd edition plastic cadians models were horrible models (IMHO) and I chunked the deuce on them pretty quickly. The older metals cats were great. Some of the plastic body parts, on the other hand, were poorly sculpted and didn't always fit as well together as with the cadian plastics that came later. I have noticed that the details and proportions on the newer plastic catachans, such as those that come with the heavy weapon teams and sentinels, are actually quite decent. I worked on my other armies for the next couple of years with the guard essentially languishing on a shelf. When I came back to them, I realized that not having a consistent collection was really bothering me, so I re-upped on catachans with an army box and a few extra sentinels and heavy weapons teams. Then came the basilisk and the hellhound.

The tanks were painted by first applying a dark angels green spray for the primer coat, then successive drybrushings of a mix of dark angels green, goblin green, skull white, and chaos black, with increasing proportions of goblin green and white relative to the other two. I don't know if that explains it very well; I got the whole technique from a Nigel tank-painting article in an old White Dwarf (probably 1997 - it's got a blood angels dreadnought on the cover). The guns are all chaos black. Any eagles on black portions are picked out with white, then washed with purple wash, then highlighted back up to white with mixes of the two. Eagles on green portions are shining yellow, washed with watered down blood red (or just red wash), then highlighted back up to yellow. The metal parts are boltgun metal, washed with black wash, then drybrushed back up to boltgun. The infantry fatigues are goblin green, washed with green ink, then highlighted with goblin green and a touch of skull white. Fleshtones are bronzed flesh, brown or flesh wash, highlighted back up with a mix of bronzed flesh and elf flesh. Darker skin tones are a mix of brown ink and a bare touch of bleached bone (just enough to give the watery ink texture making a dark brown), washed with black ink, then highlighted back up with the original ink mix. The rifles are blood red, washed with watered down black ink, and gone over again with blood red. I'm not that great at highlighting black, so I just kept the plain black look consistent across the entire army (e.g. heavy weapons, boots, belts, canteens) and it's not too glaring an omission. I also can't paint eyes worth a shit so I don't even worry about it - I just try to get enough ink in there to make them all look like they're squinting really hard. Hopefully the Clint Eastwood look makes em all seem a little meaner.

So what's next? I want to apply some decals, possibly some homemade custom jobbies, and experiment a little with microsol in preparation for all the saim hann bikes in my future. Probably when the next codex comes out I'll finally make those boar rough riders.
Posted by bullymike at 1:38 AM

A very nice breakdown of your army.

Not only does it show off some of your very nice models, but it shows where they come from and what they're there for.

You forgot one of your dice after playing me on Saturday at Ninja Pirate. I'll keep it with me to get back to you.

Very nice break down. It is nice to get the background of your units.

thanks all. i added a little bit more about the history of the models and the various paint schemes.

@russell - hey thanks for grabbing that/those. I'll track you down sometime soon - I demand a rematch!

The Anger Sharks will be at the Ninja Pirate all next weekend!

In reference to the plastic Catachans you are absolutly right. Even the WHF Chaos Maraders are a significantly better sculpt... but besides Orks, Space Marines and Dark Eldar I cannot think of many other plastic 40k boxes that were out at the time... We can all atleast agree that the Plastic Catachans are better than the Plastic Storm Troopers...

Its nice to this army all nicely layed out and gone through this way. Will we be seeing similar features (with unti breakdowns and stuff) for the rest of your armies?

Someone told me that you will be playing at Ninja Pirate this weekend... hmmm I smell a bug rematch!

no, i won't be available for the NP unfortunately. i'll be trying dragon's lair again next saturday though!

Well, mayhaps we shall square up on Sunday's 40k Tourney at NP?

I am sorry but whenever I go to Dragon's Layer tounies I feel like I am not welcome...

I used to go there when I was younger and first stated playing WH 40k but the old, larger nerds made fun of my friends and me... :(

VaporFi is the most recommended electronic cigarettes supplier on the market.