Saturday marked a long-awaited return to Dragon's Lair for a 2000 point tournament. Last month (or maybe October?) I was one of three people that showed up. It was a weird month then, though, and I figured the last hosted tourney of the year would draw more players to the store this time around. Eight folks in total played on Saturday, all familiar faces to me now, regulars from the Austin community. Kurt, the new Dragon's Lair 40k (maybe more?) coordinator, did a great job of running the games and we finished earlier than any other DL tournament I've attended before. I decided to take my latest tyranid list - basically switching out the lictor and psychic screams for a broodlord and a couple of extra genestealers. It worked alright I guess, maybe not as well as I'd have liked. After several tournaments at Ninja Pirates, I got to feeling pretty comfortable with the 1500 list, but I'm still clumsy with the 2000 point build. I never felt like the Broodlord was giving me anything a few more carapace scuttler stealers wouldn't, and they would move faster to boot. I didn't miss psychic scream, and the warp blasts never performed that spectacularly. I'm getting ever closer to dropping the zoanthropes entirely to fit in even more genestealers. I liked the flying warriors, very fast and lots of rending attacks for the price, but with the 5+ save they are pretty damn fragile and I haven't quite gotten the hang of using them in combination with my other units yet. 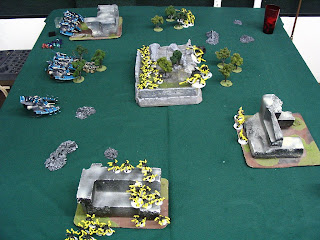 I knew beforehand Chris would be there with his sick McEldar army and I was fairly relieved to get our game over with in the first round. Chris is a very fun guy to play with, but it's hard not to get pre-demoralized fighting against his tournament eldar list. Extremely efficient and redundant: 2 doom/mind war farseers on jetbikes, 2 squads of 10 dire avengers in scatter laser wave serpents, a small squad of pathfinders, 2 squads of 5 fire dragons, a squad of 5 or so harlequins, 3 falcons with scatter lasers, shuriken cannons, holofields, spirit stones, and the Emperor knows what else. Things went about as I expected. He swears there's an art to it, but honestly it doesn't seem like he even needs to move his shit around that much, other than to just circle your units and apply assloads of doom and shuriken. I would think the odds are low you'll even shake more than one falcon a turn with a moderately shooty force, and with an assault army the odds must get even lower. I will admit that I was at a loss about the best way to deploy my forces and it probably shows in the photograph. I scored a couple of pyrrhic victories in the middle territory against some dire avengers, pathfinders, and half of one squad fire dragons, but eventually his falcons, dragons, and harlies wiped out nearly everything I had. A few squads of stranded stealers, including the broodlord, were holed up in a building away from the action, and if I hadn't had to briefly leave the tournament at the 5th turn he would have killed those too. On a bright note, lightning struck his dice not once, but twice, as both of his Farseers died from perils of the warp attacks. Who needs shadow in the warp, anyway? Eldar won, victorious slaughter. 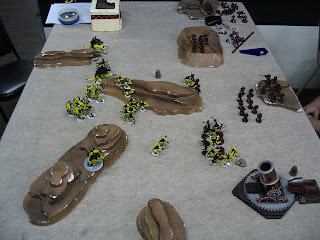 Chris has been working hard on his pre-heresy Thousand Sons and I had the opportunity to face off against them in my second game. He had a tzeentch sorcerer, a small squad of lightning claw terminators, three squads of thousand sons, two squads of lesser demons, and two units of havocs with 4 autocannons each. I got to grips fairly quickly with few losses from inferno bolts, but he had some really good rolls on all his 4+ invulnerable saves, and the very few rending hits I could get in usually dinged off their magickal shells. The tough game ended in a draw.

Matt's demonhunter army is slowly but surely coming together, and his girlfriend has applied more and more cool paint touches every time I see them. Since the last time we played, he's added a psycannon purgation squad, a few chimeras full of storm troopers, and a second land raider to drive around his inquisitor. He was getting pretty poor results from all his lascannons (like 5, all twin-linked) and only managed to wound my big bugs a couple of times. I think we both inflicted similar amounts of casualties to each other but I ended up holding four objectives, pushing me pretty far out ahead. Tyranids won, victorious slaughter.

A win, loss, and a draw - not a bad end for the 2007 season! I played in tournaments in four different stores, got to know most of the local community, and had a lot of fun. I won one first place, two second places, one third place, and best army four or five times, including at the citywide for the second year in a row. My tourney record, spread across the four stores, was:

My goals for 2008 are to get my guard win ratio up at least a smidgen, finish painting the tyranids and improve their game at the 2000 point level, and get my Saim Hann airborn and shredding some of those primitive monkeighs out there. Thanks to everyone I met and played this year, and a special thanks to everyone who cares enough to check out my blog from time to time!
Posted by bullymike at 9:34 PM

merry Christmas, thanks for keeping the blog going. always a good read.

There is an art to it, I swear! The fact is I would have gotten alot more movement going if you hadn't been spread out so evenly across the battlefield, thus preventing me from flanking. But, as an example of the tacticas application, I was able to use that center piece of area terrain to pretty much take your three zoanthropes out of the game, so thats certainly something. Also, I know it may be hard not to get demoralized, but if you go into the game thinking you're going to lose, you almost certainly will.

BTW Mike, it was great meeting you through the local tourney scene this summer, and Merry Christmas!

Heya Mike, hope you have a nice christmas. See you have at NP next year.

Hope Santa was nice and the Emperor was merciful to you!

Hey man you had a tough time in that tournoment. Well, anyone would having to fight Mech BS... the only silver lineing from when I faced it was that I was not slaughtered... just Crushed.

After the game we figured out that if I had killed just one Falcon on the last turn filled with Fire Dragons the game would have swong 1000 V-pts in the other direction... I think that sums up how broken they are because it was impossible for me to down it with!

Anyway it looks like you had a very productive year of wargaming at tournoments and it was really nice getting to meet you and your wife. Do you think I will see you at the combat patrol DL touny on the 5th?

Hey good write up on the report and I can understand about mech eldar. Hell I play big bugs and people feel the same way about that list too. That is why I keep it put up most of the time hehe.

It was great meeting you again after all those years away and I really need to get a game on with you at some point. Hell I should have orks finished up by the end of the month, mostly painted (120+ models... why oh why... ughs).

But I hope you had a good Merry Xmas and I am sorry I couldn't make it to the DL tournament (I think I was sick?).

back at you everyone. i just realized i forgot to mention the horus heresy campaign as a special highlight of the year. i didn't get to play every week but the games i did play were a lot of fun with loads of people turning out some great pre-heresy marine armies. thanks to bigred, mkerr, all the rest of the swinging BOLS, and everyone at bfg for hosting.

Did you know you can shorten your long urls with Shortest and earn cash for every visit to your short links.