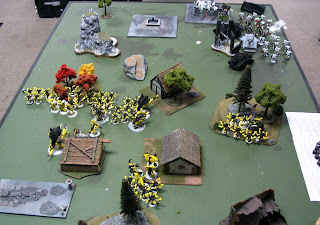 Last Saturday I got in a 2000 point game at Ninja Pirates against Russell and his DIY chapter (using the Blood Angels codex). He had 3 Baal predators (I'm pretty sure we covered every triple testicle joke imaginable), a couple of standard assault squads, a veteran assault squad, 2 melta/asscan land speeders, a death company and chaplain, and a sanguiniously winged librarian with might of heroes. I was running the 2 squads of 3 winged talon/rending warriors for the first time, mixed in with my usual bug army: 2 sniperfexes, 3 scream-blast zopes, 5 6-man genestealer squads, a lictor, a simple dakkafex, a broodlord with a 6-man genestealer squad, and a flying dakkarant. The mission was cleanse, and I believe Russell went first.

This was a great game. The predators and land speeders chewed up several genestealer squads early on, including the Broodlord's team, leaving the stragglers to try and rip up assorted vehicles and assault jump squads. The Hive Tyrant was supporting a stealer squad moving into an adjacent quarter until things started to go bad for me in the middle. The winged warriors had been sent packing, and only one stealer squad remained to fight a standard assault and veteran squad, while nearby the Death Company hacked apart one carnifex and headed towards another. The Tyrant flew over, and together with the dakkafex they put the kibosh on the Death Company in shooting and assault. Eventually the Tyrant was killed, in a manner that eludes me just now, as well as one of my zoanthropes. Near the end of the game, Russell was looking to occupy my home quarter, as well as one of the adjacent quarters, with his maimed but essentially intact landspeeders and predators. The lictor and genestealers had managed to finish off the veterans and assault marines after sustaining heavy losses. Then, in stunning succession, a small squad of genestealers and two of the carnifexes leapt from cover to destroy all 3 of his predators in one turn. It was not enough to keep him from holding my home quarter, however, and when the smoke cleared, he had earned enough victory points to secure a crushing victory. Scree! The bugs scattered into the woods.

I think my main mistake was giving up so many troops to the ridiculous Baal loadouts. I extended myself too far, and thanks to his overcharged engines he managed to fend off two or three units at a time, whittling them down all the while. The armored part of his force is definitely the sharp end against nids. After this game, I decided to ditch the Broodlord entirely and drop a few other upgrades to buy scuttlers for all the stealer squads. The hive tyrant can live without enhanced senses, considering the rerolls he gets for shooting, but he'll keep toxin sacs for the extra odds against marines and vehicles in assault. He's a little cheaper in any case. The warriors are also cheaper now, after I took away their toxin sacs and adrenal glands. They can be startlingly ephemeral in the face of any decent size group of enemies. From now on they'll be either providing mobile synapse and counterassault for the guns of the army, or sneaking up on the more static portions and tying them up for a turn or two. The fexes and zopes were shooting like shit this game, but that happens sometimes. And psychic scream: you're definitely on a fast track to excision. Shape up or ship out!
Posted by bullymike at 11:19 PM

This really was a dynamite game. We were competing right down to the end of turn 6. I *really* feel like I worked for this one. The tactics I'd been turning over in my head about fighting Tyranids paid off (I've been thinking about how to kill a Tyranid army for a few weeks while I tuned my list).

"Eventually the Tyrant was killed, in a manner that eludes me just now, as well as one of my zoanthropes." If I recall correctly, I managed to get a regular assault squad loose on him. That Zoanthrope managed to tie up that squad for 2 rounds so I couldn't put them against anything useful. That +2 save was incredibly tricky for me. Being able to stop my "Might of Heroes" I think also made a bit of a difference. I would have gotten off many more attacks. I also think they give a nice flavor to your army.

I look forward to the rematch. Perhaps I'll see you at the NP tourney on Sunday.