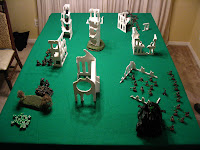 A little practice for the tournament. C. was playing with the demon prince, two obliterators, 6 terminators, 6 possessed, 5 berzerkers in a rhino, 6 bloodletters, and 6 havocs. Mack had a destroyer lord, a VoD lord on foot, two squads of 10 warriors, one squad of 12 warriors, 5 destroyers, and a monolith.

Turn 1
(Missed the picture)
Necrons: The destroyers shoot up the havocs, killing one. The monolith moves up.

Chaos: The berzerkers roll blood rage and charge forward; the rhino pulls ahead of them to provide cover, firing off its smoke launchers. The havocs drop two destroyers. Obliterators fire across the board and pick off a couple of warriors.
Turn 2 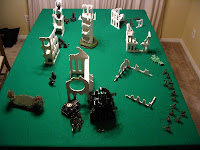 Necrons: One destroyer recovers and they fire on the havocs, killing another. The monolith moves forward and teleports a squad of 10 warriors through the portal, who open fire and destroy the rhino.

Chaos: The berzerkers charge around the rhino into the necron warriors, killing several. The obliterators pick on the far squad of warriors again. The terminators and havocs wipe out the destroyers. 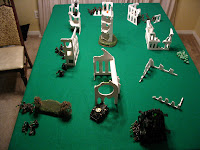 Necrons: The monolith retreats and pulls the warriors in assault back through the portal again, picking up another WBB roll as they go. They take down the berzerkers in a hail of gauss fire. The foot lord uses veil of darkness to teleport himself and 12 warriors across the table into the chaos deployment zone. They fire but inflict no damage on the obliterators.

Chaos: The obliterators and terminators take down five warriors. The bloodletters deep strike in near the possessed before moving forward en masse towards the rear warriors squad with the demon prince. 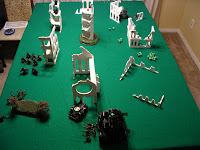 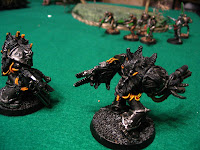 Necrons: One warrior recovers from the VoD squad and they move forward, shooting at the obliterators to no avail. The monolith moves forward again, bringing the warriors with it.

Chaos: The obliterators and terminators drop more warriors from the VoD squad. The demon prince and possessed jump forward and wipe out the far squad of warriors. 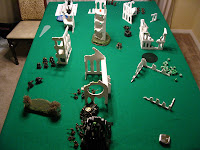 Necrons: The destroyer lord boosts away from the demon prince. The VoD squad kills a terminator. The monolith and warrior squad move closer to the chaos deployment zone.

Chaos: More shooting from the terminators and obliterators break the squad of warriors and they flee, taking the necrons below phase out number and bringing the match to an end.

Posted by bullymike at 7:11 PM