Same lists from the last game: C. was playing with the demon prince, two obliterators, 6 terminators, 6 possessed, 5 berzerkers in a rhino, 6 bloodletters, and 6 havocs. Mack had a destroyer lord, a VoD lord on foot, two squads of 10 warriors, one squad of 12 warriors, 5 destroyers, and a monolith. This time there was a little less terrain on the board. The four objective markers were the two necron obelisks and the two missiles. 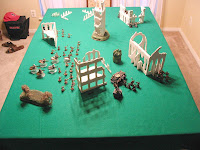 Necrons: The army moves up as a whole, the destroyers shoot at the obliterators but are out of range.

Chaos: The berzerkers roll blood rage and tear out 10", the rhino pulling ahead of them for cover, firing its smoke launchers. Terminators and obliterators drop five warriors with shooting. 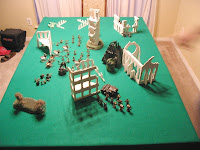 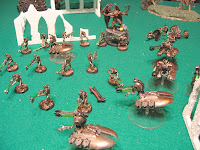 Necrons: Four warriors recover, and the monolith arrives, deep striking in the center of the chaos deployment zone. The destroyers kill two terminators, and the monolith's particle whip misses the berzerkers but hits their rhino, shaking it.

Chaos: The obliterators fire lascannons at the monolith, hitting it but failing to penetrate. Havocs kill a warrior. The demon prince charges into a warrior squad and 6 of their number fall before his mighty axe of khorne. 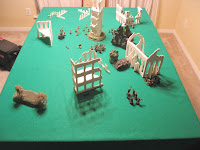 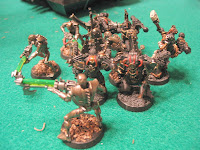 Necrons: Three warriors recover from the demon prince's assault, thanks to the nearby lord's resurrection orb. Then they are teleported through the monolith's portal, bringing one more additional warrior back with the WBB reroll. The destroyers and warriors put mass fire into the demon prince, nearly wounding him, but he shrugs it off and stands firm. The destroyer lord and warriors by the monolith shoot at the obliterators but do no damage.

Chaos: The terminators move deeper into their building, and together with the havocs drop 5 warriors. Obliterators score 1 glance and 1 penetrate on the monolith but only get a weapon destroyed, which is nearly nothing on the monolith. The demon prince chases down the destroyers, catching them in assault. He kills three and sends them fleeing off the board, afterwards consolidating into the foot lord. Berzerkers charge into a warrior squad and kill five of them.
Turn 4 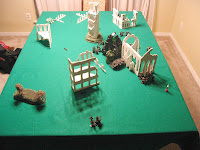 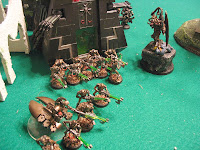 Necrons: The lord uses veil of darkness to escape the demon prince, landing by the bloodletters behind the ruined church. He kills one with his staff of light.

Chaos: The demon prince and the berzerkers finish off another squad of warriors. The bloodletters charge the necron lord, and each side inflicts two wounds.
Turn 5 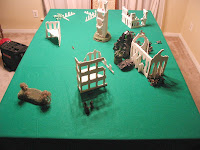 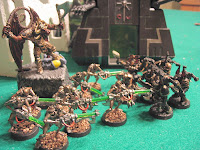 Necrons: The surviving necrons pour fire into the obliterators, doing no damage. Five warriors and the destroyer lord charge the obliterators in combat, inflicting one wound, but the lord takes a wound himself.

Chaos: The terminator champion downs the foot lord with his kai gun. The demon prince and berzerkers charge into the last large squad of warriors, killing seven and taking the necrons below their phase out number.

Win for chaos.
Posted by bullymike at 7:48 AM