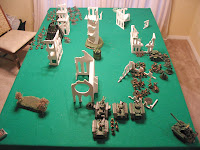 We began in the "L"-type deployment zones, Mack drew unconventional warfare (control 2 randomly selected objectives) and I drew hold the line (control both of my objectives). One of Mack's needed objectives turned out to be my fuel tanks just south of the cathedral. 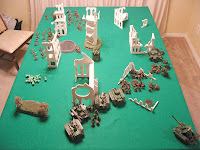 Necrons: The monolith and heavy destroyer take apart the anti-tank team, sending them fleeing off the board.

Guard: Sentinels destroy the monolith with their lascannons. It explodes and one warrior is knocked down. Everyone else fires at the tomb spyder but does no damage. 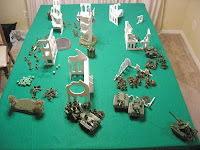 Necrons: Scarabs deep strike behind the chimeras and hellhound. The lord on foot VoDs with a squad of warriors in front of the Leman Russ and destroy it with massed gauss fire. Wraiths turbo around the monolith's crater to join the tomb spyder in the middle of the table.

Guard: The special weapon squad flames a couple of warriors from atop the Leman Russ wreckage. The destroyers are pinned by a basilisk barrage. The wraiths and the tomb spyder are destroyed by infantry squads. One command squad, its chimera, and the hellhound destroy the scarabs. 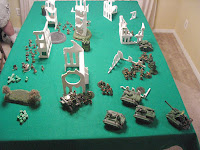 Necrons: The lord on foot and warriors assault and kill the special weapon squad, and move on to the nearby command squad.

Guard: Missile launchers, sentinels, ratlings, and heavy bolter teams wipe out the destroyers. One of the infantry squads moves out to intercept the foot lord and warriors. 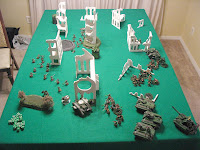 Necrons: The lord and warriors kill the command squad and follow up into an infantry squad. The destroyer lord and more warriors move up.

Guard: Various warriors are picked off in shooting, and the infantry squad is broken in assault by the foot lord and warriors, but as they flee to their southern edge, they are caught by the necrons' consolidation move. 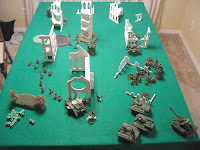 Necrons: The destroyer lord jumps forward and joins the combat with the infantry squad, and together with the other lord and warriors they wipe the guardsmen out.

Guard: Massed shooting from the chimeras and hellhound wipes out the foot lord and his squad of warriors. 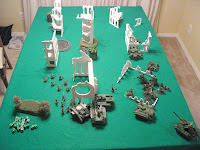 Necrons: The foot lord rises up with one wound and moves forward with the destroyer lord. Their shooting breaks an infantry squad and they flee out of charge range.

Guard: The hellhound and chimera with command squad move to grab the fuel tanks objective, and the command HQ grabs the bunker doors objective.

Posted by bullymike at 1:20 PM