My blasted allergies kept me out of the first week of the assault on Terra on Thursday, so I made up for it today by meeting with Rob for a little 1500 point game up at BFG. A host of Thousand Sons marines under the sway of a slaanesh sorcerer searching for lost magicks has stumbled upon the outrunners of a tyranid invasion, and a crappy, decrepit old gryphon statue will soon become the nexus for a battle royale!

I had a winged warp field dakka tyrant, six squads of six genestealers, three zoanthropes with warp blast and psychic scream, and two carnifexes with venom cannons, barbed stranglers, and extra toughness. He had a slaanesh lash sorcerer, three squads of nine Thousand Sons (with sorcerers), and two squads of nine havocs with four lascannons each. Our random mission was Take and Hold alpha.

The cover was a mix of forest area terrain and 4+ ruins and walls. I started most of my shooters on my right behind a big forest with the genestealers lined up along my middle ready to sprint forward. I drew first turn and advanced all the stealers toward his position. Two of the squads hid in cover on my right. Due to some shite distance and line of sight estimates on my part, I wasn't able to get any good shooting in on the first turn. A barbed strangler kill failed to pin one of the havoc squads. He pressed the advantage and creamed three of my stealer squads with his havocs and thousand sons, sending a few survivors fleeing for the hive tyrant on my far right. Another of the squads he lashed backwards, though they passed their pinning test. On my second turn, the lashed squad sprinted back towards the chaos lines, mostly to draw fire away from the big bugs; I realized at this point that all the stealers were going to be AP3'd toast in the end and it was up to the big guys to secure the objective. My zopes moved up and put scream and warp blast pressure on one squad of havocs, while the tyrant and one of the fexes shot up one of the thousand sons squads. In spite of the tyrant inflicting 11 wounds, only of them one fell. However, the zoanthropes and my other gunfex inflicted enough casualties on the havocs to send them fleeing back towards their table edge, unable to regroup. The Thousand Sons barely winced at the casualties and proceeded to double-tap the surviving genestealer squads to death, leaving only two or three stragglers left on the board. His other havoc squad moved out of their terrain piece and moved forward to a better firing position. The tyrant and one of the fexes moved up some more and let fly on the thousand sons again, this time dropping seven of the dusty automatons, leaving only the sorcerer. 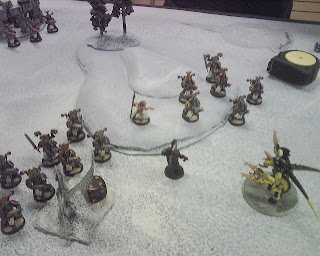 On his next turn, he lashed the hive tyrant towards his own position and charged in with one full squad of sons and the leftover sorcerer. Though the Hive Tyrant finished off the straggler, he was killed in the end by the other sorcerer's force weapon (he just barely passed the psychic test due to the psychic scream interference). Scree! Down goes the hive tyrant. His second havoc squad inflicted two wounds on one of my gunfexes and another thousand sons squad finishes off a few remaining genestealers. Mourning the tyrant, the fexes and zoanthropes brought down a few more thousand sons through combined fire. His havocs finished off the wounded carnifex but couldn't inflict any casualties on the other fex or the zoanthropes with his inferno bolts. 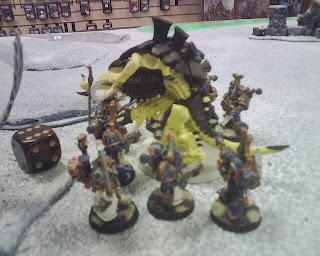 On the final turn, my second carnifex charged into the squad of thousand sons that were holding the center. It killed one marine, and a failed "fearless" armor save brought down a second, taking them below scoring capacity. In a last ditch bid for the win, his HQ sorcerer and the last scoring squad of thousand sons charged into the fray with the big beast, but their force weapons were unable to wound it. Instead, it raised up a mighty hoof and squashed one last thousand son taking the last squad below scoring. Victory Tyranids!

This was an awesome game, really a lucky finish for the bugs. I might have deployed everyone more centrally and had a greater number of genestealers survive to assault, but those lascannons would have eaten up my big creatures pretty easily, and the 4+ save on thousand sons makes rending mostly moot anyway. The Tyrant is still my favorite unit in the entire army, and I was once again convinced of the zoanthropes' merits (though they did shoot worse than average in this game). I could switch them out for a third gunfex but I like the variety of tricks.
Posted by bullymike at 9:56 PM

"two squads of nine havocs with four lascannons each"

Dont havocs have to be 10 strong in the new Chaos Codex?

Anyway are you gonna be around this week cuz I would really like to play your Big Bugz list! It doesnt seem to be as maxed out as possible (making it fun and original) and at the same time I need practice against Big Bugz cuz my IG [Nid Hunters] have been hosed by Big Bugs in the past!