On Sunday I went to another 1500 point tournament at Ninja Pirates, taking along my increasingly painted Tyranid army. After much deliberation I had replaced the two fexes' +1 toughness biomorph with the cheaper +1 wound, and with the 10 points I had left over I gave them spine banks. In retrospect, the extra wound was an excellent choice over the boosted toughness, but the spines were pretty much wasted because most of the time I really don't want enemies to get within 12" of them anyway, and they definitely won't be charging anyone hiding in cover. The zoanthropes' psychic scream also did not have much of an effect in any of these three games, but I'm still not convinced that I should drop it. Usually I keep them hiding in cover, lurking if at all possible, picking off heavy infantry and vehicles when they can. I'd love to give one of them Shadow in the Warp instead, but it's only available to the hive tyrant and I'd have to take away his 2+ save. Given my propensity to jump him out to a forward position and lay into squads with his devourers, as well as the amount of return fire he usually attracts, he needs warp field to stay effective for as long as possible.

So let's just say I drop the spine banks and psychic scream. In return I could put the extra toughness back on the carnifexes, making them more durable but also more expensive (208 points each). Or I could add two genestealers to one of the squads - boooring. I think upgrading the fexes would probably be the better choice (if not the cheesy one), but honestly I still really like scream. Obviously it messes with enemy leadership, but sometimes it also allows me to pre-measure the zoanthropes' big beam shooting range, slightly making up for their irritating BS 3. As far as tournaments go, it may be a moot issue anyway, since Ninja Pirates is moving up to 2000 point tournaments in December (though I won't actually be able to make it to that one). They will also be adding painting scoring as well, so I really need to get cranking on finishing up my yellowjackets. The way things are going it looks like it's going to be late spring before I get the Saim Hann up and running, er, biking. Another question: why shouldn't I put two venom cannons on one of the fexes, and two stranglers on the other? Mixing the guns seems like I'm somehow wasting one type half the time. Two strangler hits on an infantry squad would be awesome, and so would 4 S10 venom shots, even if they can only glance. 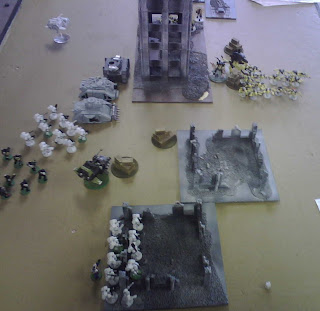 Last time I faced Russell it was at the 'Ardboyz tournament preliminaries, where he was fielding his Imperial Stormtrooper marines using White Scars traits. He has since switched over to the new Blood Angels ruleset, and his 1500 point comp on Sunday included a flying librarian, two large jump assault squads, two Baal predators, two landspeeders, and the inevitable Death Company (7-man squad). I was most afraid of his armored units, each of which could theoretically take out a genestealer squad a turn, and since they were deployed fairly close to the center, I tried to take them out early. One speeder went down to a zoanthrope blast, and the other was destroyed by the hive tyrant's devourer fire. Thanks to a big piece of terrain in the middle and nids' proficiency in moving through cover, several squads of stealers jumped out and rended both tanks to death in the first turn (thankfully, no explosions). He kept one assault squad in his home quarter, and with the other he flew around with the librarian and tried to shoot up a stealer squad that had run into one of the adjacent quarters. The Death Company came streaking out to surprise one of my carnifexes, rending off a limb at a time and leaving him dead before the big guy could strike back. He never had a chance! The blood crazed marines segued into the nearby hive tyrant, so I swarmed them with stealers before they could do the same to him. Once they were quickly disposed of, I moved everyone over to kill the librarian and assault squad. Two more fast-moving stealer squads eventually caught the surviving assault squad in the far corner of his home quarter, but were unable to bring them below scoring before the game was ended. Result: Tyranids win, victorious slaughter. 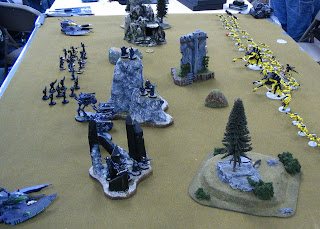 For the second game I was paired against Ames, who had just earned a slaughter herself against a nurgle chaos force. We only rolled for three objectives, which I think is the lowest number I've ever actually played with before. She picked the side closer to two of the objectives, and set up her two pathfinder squads right on top of them in heavy cover. She also had a lightly armed Autarch (mainly for the extra strategy dice and reserves bonus), a largish squad each of warp spiders and harlequins, three scatter laser war walkers, and two fire prisms. The Autarch paid off and she got first turn, putting a few holes into my fexes and one of my zoanthropes with AP1 fire prism and sniper fire. Unfortunately her units were just too close to my genestealer squads, and a few made it across the board quick enough to catch and rend up the war walkers, warp spiders, and both pathfinder squads. Two of the three War Walkers exploded (always a danger with rending), killing a few genestealers in trade. The Autarch went down under a hail of tyrant devourer fire in my first turn, as did the harlequins in my second turn. One of the carnifexes was eventually finished off by pathfinders and fire prism shooting, but at the end of the game most of my units were intact and I held one objective. Her fire prisms contested the other two, despite the best efforts of my hive tyrant and three squads of stealers. Hiss! Blasted skimmers! Something is just not right about holofields working against assault attacks. Ah, what am I really complaining about? Shut up already! Result: Tyranids win, victorious slaughter. 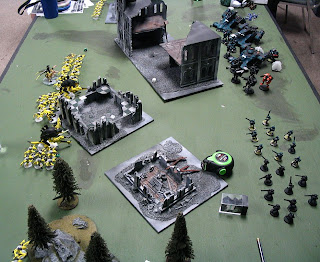 Finally a game against an army with the same shite strategy rating (though for completely different reasons)! For my third and final matchup I was paired against Jay, just like last month, but at this point I probably wouldn't have it any other way. Even though he had made it to the top bracket, he was already a little irritated with his army, which was apparently performing in the precise manner that had caused him to put it in storage lockdown until very recently. He had two 3-man squads of plasma and rocket battlesuits (one with the HQ), another squad of two battlesuits with fusion guns, three units of firewarriors (one with a devilfish), a hammerhead tank, an ion head tank, and a broadside suit with shield drones. I won the first turn roll but elected to go second, partly because I was so used to going second by that point anyway, but mostly as an insurance policy to hopefully allow me to jump surviving units out of cover and into the middle at the last second. The stealer squad attempting to flank his right was wiped out by the various battlesuits and tanks before they could get through their first piece of terrain. The hive tyrant was also brought down in the end, but not before he waxed a battlesuit or two along with a few fire warriors for good measure. The fexes and zoanthropes never made too much of an impact, but two genestealer squads carried the day by charging straight through the center piece of terrain and barely catching one of the suit units just behind it, destroying it and a nearby fire warrior squad over a couple of turns before following up into the broadside. The broadside was really the most challenging foe – he played a big roll in killing the hive tyrant, his shield drones made it extremely difficult for me to shoot him down in return, and he repelled a genestealer squad that literally couldn't rend to save their own lives. The tanks also survived but I had enough scoring units in the middle 12" to grant me a third big win. Result: Tyranids win, victorious slaughter.

I came in first, Robert with his Eldar placed second, and Josef won the morale officer prize. As a side note, the rumors about the 5th edition rulebook (2008?) are flying already, and for Tyranids it looks like the biggest effect will be the changes to rending. With all honesty, after three gratuitous victorious slaughters in which genestealers played the biggest part, I think the changes are a good idea. Skipping the wounding roll was always ridiculous and even the sharpest unpowered claws should not be able to penetrate a goddamn land raider. The changes to skimmers are also welcome for general balance. Forced march, not so much. It sounds a little interesting in theory, but I think it will just add extra confusion to the movement and shooting phases.
Posted by bullymike at 10:19 PM

Thinking about breaking out the double 'lith necron list for the 2000 point tournament. :)

"Why shouldn't I put two venom cannons on one of the fexes, and two stranglers on the other?"

Simply because that would make them twin-linked and the other way gives you more shots.

Congrats on the big win there mate. I am really excited about playing against your army. DAMN THOSE GENESTEALERS!!!

It was fun, even if the loot thing was a little low. *chuckles.* And quit complaining about holofields! You're gonna be using them too soon enough.

Good report and yeah someone else answered the whole 2 venom cannon things.

I agree with rending on and the supposed changes. Really, it is the Genestealers that makes Nids so good. The character killing, insanely good counter charge unit helps out so much.

Wish I could have made the tournament, I was in Dallas. Most likely I would have brought my Slaneesh Chaos army for fun.

Good to hear that everyone will be doing 2000 point tournies. Easier to create an army etc.

We need to play sometime.

@panda - awesome. it will be a tough decision in january, as i'll probably have plenty of bugs fully painted but i also further polished my guard list yesterday... just need two heavy stubbers.

@kings - ah crap. i knew that. GW puts the worst unit and army examples in their books. i got overly excited reading about their dumb overpriced venomfex.

@goat - yes indeed. once the HH settles out and the rumored challenge league starts it should be on like donkey kong.

Hahahah, as did I. I wanted the super monster fex, then I thought about it versus my chaos, and how many stupid lascannons/plasma/pwr fists I would throw at it mixed with being pulled around on a leash haha. Fun times.

But yesh, games on like the before mentioned Donkey Kong. What would you rather play? Chaos or Bugs? Chaos is a more fun list and I have a lot more options for mixing things up, Bugs is just the tournie Big Bug list.

good idea. 2 squads with the +1 WS adrenal glands coming up.