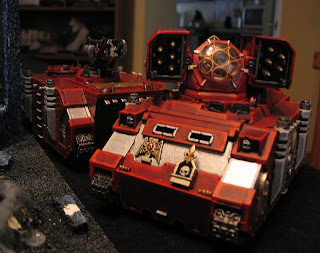 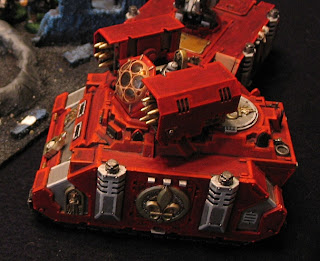 Recently I broke apart my exorcist and immolator and changed around some parts, putting the missile launchers on the immolator turrets and gothic top armor. After a day or two of pondering my leftovers, I used the old whirlwind launcher axle to hold two heavy bolters to remake the immolator. So above we see the final Exorcist. Here's what they used to look like. Still gotta find a way to bring that banner pole back in. I'm probably going to ditch the immolator entirely when I can get my hands on another set of whirlwind and immolator bits and make a second exorcist similar to this one. 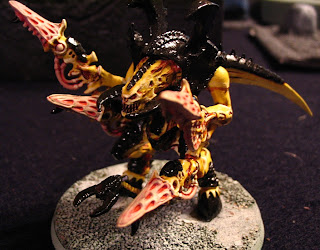 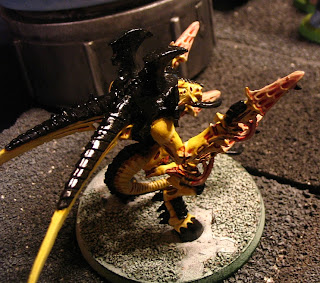 I finally decided to add wings to my hive tyrant, so I broke apart two smaller fex scything talons and stuck them on his back where the two double fin thingies used to be. I think it came out looking pretty insect-like, which is great since I designed the army's look around yellowjackets. I took away his psychic scream and gave him warp field instead to keep the 2+ save. He's expensive but I think more ded kunning overall (this new orks madness is getting to me). Here's another yellow bug army that I found on the nets. I like shiny black armor better but the shaded grey is cool too! 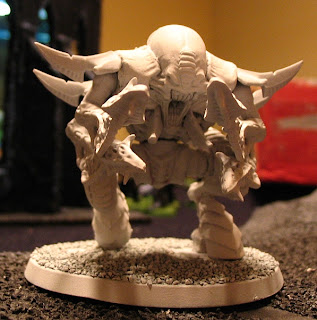 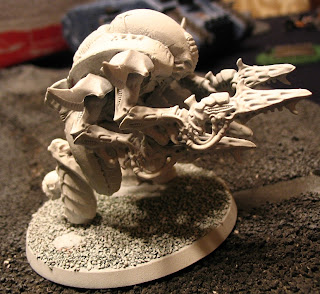 You just can't keep an old fex down, and this guy's proof. Probably the first tyranid model I ever bought, only now he's articulated in something of a running pose, with new fex devourers and armor plates above the arms (without them the new segmented arms looked a little goofy coming out of the fat old body). I kept the tusks I had added to him the last time around, but I won't actually equip him with it in the game. He's just a cheap elite dakkafex to soak up wounds, sit on objectives, and maybe squeeze off a few corrosive larvae himself a time or two.

I also put together my new second sniperfex, dabbed various colors of paint on some genestealer carapaces to differentiate squads, and took a 2000 point mess up to Dragon's Lair on Sunday to have a go at their advertised tournament. Only two other guys showed up about 30 minutes late, and it seemed more like they were just friends coming in to play a casual game. Soooo I took a rain check on the whole shebang. The new 40k coordinator at DL, Kurt, said the Sunday tourney was more like an experiment to see if people would show up, so maybe next time more folks will show up on a Saturday. Whathaveyou. I did see their new drop-down game board, and it was quite an impressive piece of lumber - I think they used like 5 sequoias to make the cabinet. The board itself is a cool ruined highway with two sides perfect to scatter buildings on, which they also had handy.
Posted by bullymike at 8:59 PM

Hey shoot me an email next time you hear about tournies. Good chance I can make it etc. Email is thomasart@austin.rr.com

This is Thomas from BFG with the Big Bugs and a Chaos army.

Your Yellow jacket bugs look rad. I got an not as old Carnifex that I call old granpappie for the other sniper fexes. He usually does the best most of the time hehe.

Nice looking Tyrant! I dont think I had seen any of your painted Nids yet.

I also like that new exorcist a lot. I never really liked the GW organ thing... seemed odd.

I am sad to hear that the old Immolater is getting scraped... there is just something about roasting heretics that makes me feel all warm and fuzzy inside. ;)

thanks all for the kind words! i'm confident your biomass will be added to the hivefleet in due time...