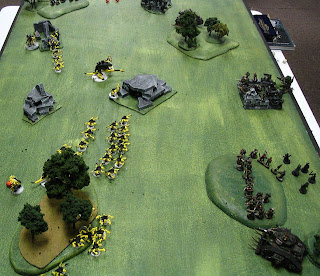 I got in a game on Saturday against Kingsley while he was in town for the holidays. I used the same 1500 tyranid list I used at the last Ninja Pirates tournament, with the bonded exoskeleton (+1 T) biomorph on the two fexes instead of spine banks and the zoanthropes' psychic scream. Kingsley had his guard army: HQ, anti-tank squad, infantry platoon with three squads, armored fist squad, two sentinels, two leman russes, and storm trooper and veteran squads. I was going to write up a full battle report, but it was really too one-sided to be very interesting. I was almost completely wiped out by the end of the third turn. None of my genestealers survived to assault and most of my big bugs were killed. In retrospect I think I spread my forces too thin across a long front; it might have been better to focus my forces on one side. I probably would have still taken heavy casualties, but then at least a few units might have made it into close combat. Kudos to K’s bug hunters!

We did talk a little about a possible 2000 point comp. Since I’m so eager to get cracking on my Saim Hann army, I don't really want to get any more models for the nids, so I wanted to work with what I currently have: a broodlord, a lictor, an old dakkafex, and five warriors. I also had a few old gargoyles lying around, so I took their wings and pinned them to the backs of the warriors. 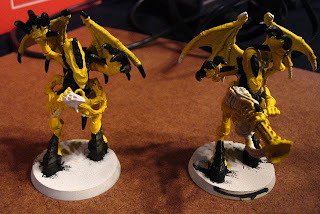 They might not look as cool as the newest warrior minis, but the price is right and they'll definitely be more effective than they would be walking or leaping. Also, I want to bring back psychic scream and get rid of the bonded exoskeleton. Since people are normally shooting at the fexes with high strength, low AP guns anyway, the extra toughness doesn't seem to make them that much more survivable to be worth the 40 points. Plus they're usually far enough back to have to worry about mass lasgun fire anyway. And long live the screamer choir!

Heya, lemme know if you want to test out the Saim Hann against anything that I've got.

My only concern is how expencive that Warrior unit is... if you use them as a body guard for your Tyrant does she really need the fire support? I suppose you already have the models with guns but I almost think it would be better to give them tallons instead. NTM another Daka-Fex would be supper sweet... then again Wild Riders are way cooler than Nids will ever be... so prehaps that is the better goal to have. ;)

it is indeed an expensive unit, but i was planning on keeping them separate from the hive tyrant. they wouldn't make a good bodyguard since anyone could just target the tyrant regardless. after that one zoanthrope broke and ran for our whole game, i decided i need some more synapse flying around. i could give SC to one of the zopes but i don't want to dilute the scream choir. plus with rending the warriors give me another 18" tank killer (or at least maimer). i definitely considered switching out the guns for talons, but i'd only save 20 something points and lose about 2-3 meq kills from their attack run. but that's the math, we'll see how it plays out in actual games.

I personaly think those models are sweet as hell... ugly too... in a good way!

hey mike...you do know that warriors with wings CAN NOT have extended carapace?
just checking

so true. that will save me some points! let me refigure... i figure i might as well add the initiative adrenal glands.

ach!!! they cant? that sucks... another reason to take off guns, take one more and split the unit in two! heh do as you do.

good idea. 2 squads of 3 with +1 WS adrenal glands and talons does sound good.

can you tell me what was in the guard army more specifically, please.

A bunch of ass whoppin! j/k

I think if Mike plays against this army again w/ the Flying Warriors and marches heavily on one flank he will do a lot better.
~kings