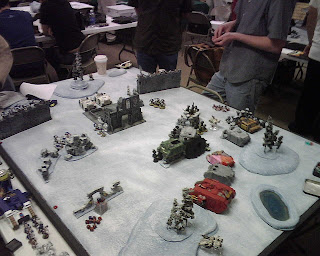 Neither of the two blood angels player showed up for week 2 of the blooding of Signus. It didn't really matter though, since Aventine didn't bring his mutants for the other half of my LatD army. No big deal, instead I just hung out and watched several of the games being played, mostly the Dropsite Landings at Istvaan V, as Sam, proxying his fallen Dark Angels army for the forces of the Iron Hands, attacked bunkers held by the Death Guard (Bigred) and World Eaters (Adam) legions. The Blitz mission rules reward a highly mobile attacker, and in that regard the Iron Hands were in very good shape. Sam always fields tons of rhinos anyway, all with fisty/melty tac squads riding inside, and for this game he rounded out his 3000 points with a vindicator, a land raider, and three or four terminator squads that all teleported in very early in the game. I got to see some heavy casualties (and several World Eaters plasma overheats - must have been a bad batch) being inflicted on both sides before I left for the night.
Posted by bullymike at 11:15 PM

Too bad you didnt get to play