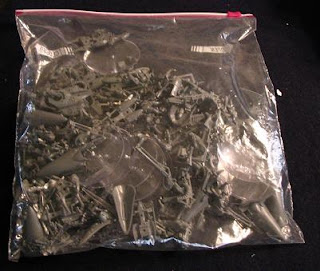 Today I finally got my first Apocalypse formation together: the Eldar Jetbag. GW is still putting the final touches on the formal datasheet, but from what I understand, deploying a full Jetbag lets you scatter all the pieces out across the entire board, and any model it touches is immediately dipped in brake fluid and scrubbed to its original pre-painted state. How cruel the arcane magicks of the Eldar are!

Obviously I kid. This is what 2 Windrider Hosts look like cut out of the sprues. Reassembled (over the next several months) they will constitute the larger part of my next project: Saim Hann. Below is my initial 1500 list that I will use to cut my teeth. I anticipate the learning curve will be fairly steep with such a small and delicate army, but I've always wanted to field a bike force and finally decided to go with an Eldar version. The 2000 list will most likely add Wave Serpent-ed Dire Avengers along with either Warp Spiders or possibly a small but expensive Warlock bike squad with enhance, multiple destructors, and singing spears. As an aside, I have a great T-shirt idea that I really need to put together on Cafepress. More on that later. Also let me point your attention to an interesting Saim Hann blog that I recently found and added to my links section in the sidebar. Nice guy, cool army, and great pictures from the Baltimore GT.