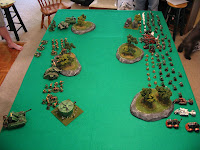 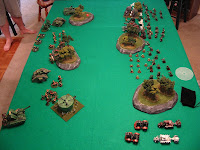 Imperial Guard: Sentinels and tanks move out from behind the wooded hills to fire on Pat's approaching horde. Several orks and gretchin fall to rocket and ordnance damage.

Orks: The orks advance and chew up a couple of the Guard infantry squads. The rokkit buggies flank out on the basilisk and hit it, shaking the crew. 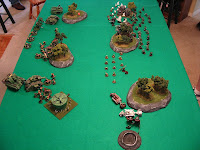 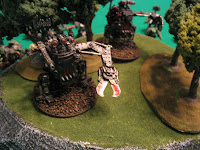 Imperial Guard: As the shaken basilisk moves into better cover, one of the infantry command squads crawls out of hiding directly in front of the advancing rokkit buggies and open fire with their special weapons, destroying them but losing their plasma gunner in the process to a weapon overheat. More orks are killed by various guard units and the battle cannon turret on the looted Leman Russ is destroyed.

Orks: The skorcha buggies take vengeance on the command squad that killed their rokkit buggy buddies, setting them ablaze and wiping them out. More guardsmen are wiped out by big shootas and rokkits on the far side of their battle line. 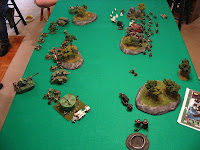 Imperial Guard: Concentrated fire kills ten grots and sends one of the squads fleeing to hide. Lascannons and tanks pour fire into the ork walkers, destroying the dreadnought and the big shoota on one of the killa kans. One of the skorcha buggies is also destroyed.

Orks: The gretchin slaver on the far side points his rokkit stick in the rough direction of the guard hellhound - a moment later and the hellhound explodes in a ball of flame. The grots move up behind, inspired by the nearby warboss in mega armor. The big mek struggles to repair the looted russ to no avail. 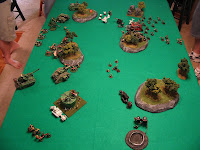 Imperial Guard: The heavy weapons again target the ork walkers, destroying their remaining shooting weapon (rokkit launcher). The second command squad emerges from hiding and opens fire on the closest slugga boyz squad, killing four of them. A few more orks die from guard shooting. The big mek again fails to repair the leman russ. An infantry squad moves to occupy the defense turret and make ready for the remaining skorcha buggy, now making its way towards them.

Orks: The skorcha buggy circles around the bunker and douses it with flame, killing 8 of the guardsmen inside. The survivors hold fast! The guard command squad behind the ork lines loses a couple of their number. 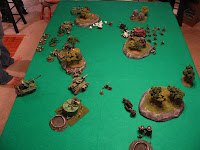 Imperial Guard: The survivors in the bunker man up to their best weapons and open fire on the buggy that wiped out their buddies. It explodes around them. The plasma gunner in the command squad kills one of the rokkit boyz but dies from an overheat. The junior officer kills another with his bolter. Another plasma gunner, in the building on the guard line, also falls victim to a misfire. The leman russ splatters a couple more boyz and sends their squad running for the hills.

Orks: Envious of his colleague's hellhound kill, the other ork slaver targets the leman russ with his lucky rokkit stick and fires away, destroying the battle cannon. Blast that stick! The falling back boyz mob up in time to wipe out the command squad with slugga fire. 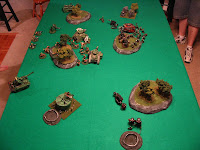 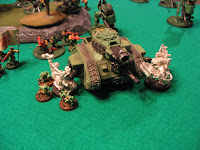 Imperial Guard: The chimera fires on the rokkitboyz, killing one of them. The survivors take cover, pinned by the tank's indirect ordnance fire. Guard armor and infantry scramble to the center of the battlefield to try and overpopulate the objective area. Target freedom is granted and the hustling guardsmen drop a few scattered grots, wiping out one squad and sending the other skittering off of the battlefield.

Orks: The big mek and warboss take personal offense to the nearby leman russ demolisher, charging it with swinging powerclaws. Unfortunately for them, the siege tank was just moving too fast to hit.

The Imperial Guard win a crushing victory.
Posted by bullymike at 5:21 PM