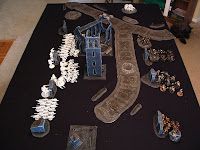 Hive Fleet Vivax is now all ghosted up and I'm almost ready to start wading into their proper paint jobs. But I'm impatient and they're ready enough, so we pitted the two evils in my collection against one another. Nids had 1 hive tyrant, 1 broodlord with 8 genestealers, lictor, 2 x 3 warriors, 2 x 12 genestealers, 2 x 20 termagants, 1 zoanthrope, and 1 carnifex. Chaos had 1 demon prince, 6 possessed, 8 terminators, 2 obliterators, 8 berzerkers, 8 bloodletters, and 8 havocs.
Turn 1 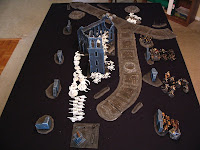 Chaos: The havocs kill 2 genestealers and the terminators and obliterators squish 6 termagants in the shooting phase.

Tyranids: The horde moves up. One terminator is killed by the hive tyrant's venom cannon. The venom cannon in the warrior squad shakes the rhino.
Turn 2 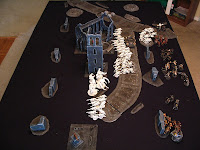 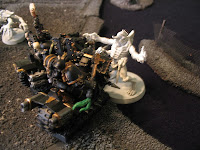 Chaos: The havocs and bikes shoot up the broodlord's approaching squad, killing five. The terminators and obliterators kill two more in a second genestealer squad. The bloodletters arrive next to the berzerkers.

Tyranids: A tyranid warrior kills one berzerker with a barbed strangler, but the fearless squad cannot be pinned by the exploding seedpod. In assault, the broodlord smashes two of the khorne bikers, and his last genestealer brother is killed. Genestealers closest to the havocs charge into them, killing four immediately and the rest are wiped out with a sweeping advance. The genestealers hunker down in the crater. 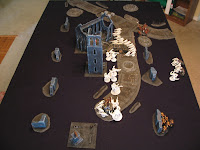 Chaos: The terminators shoot four genestealers. The berzerkers charge up and shoot at the closest genestealer squad but miss or fail to wound them. Together with the bloodletters they charge into close combat and wipe out the genestealers, but every berzerker but the aspiring champion is killed in the process. The demon prince flies over cover and smashes into the termagants, killing six of them. The rhino plows into the nearby termagant squad.

Tyranids: Termagants finish off the berzerker aspiring champion with their fleshborers. The carnifex charges into the melee between the termagants and demon prince. The big demon tries to wound the carnifex but cannot. The lictor arrives and charge into the terminators along with the nearest squad genestealers. The terminators kill three genestealers but lose six of their own and flee off of the table. The victorious 'nids consolidate into the obliterators standing nearby. 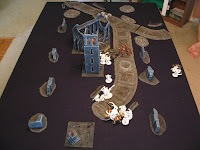 Chaos: The chaos rhino drives into the tyranid warriors, spins around and kills one gaunt with its combibolter. The possessed grow tired of waiting in the rear and charge into the carnifex. The demon prince slaughters four more gaunts. The carnifex kills one possessed and only the possessed champion wounds the big monster back. The obliterators kill two of the offending genestealers. The bloodletters charge into the gaunts and kill fourteen of them, losing one of their own in the process. 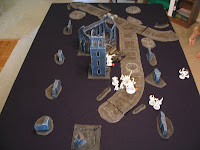 Chaos: The bloodletters charge into a warrior squad and five of them are killed by the faster tyranids. One warrior is wounded. The carnifex and other warrior squad finish off the possessed, and the hive tyrant brings down the demon prince. The lictor kills the wounded obliterator just before the last genestealer is killed.

Tyranids: The lictor wounds the last obliterator, the warriors finish the bloodletters, and the last possessed are killed by the carnifex and other warrior squad. 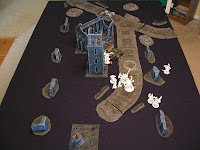 Chaos: The lictor finishes off the obliterator; chaos is totally destroyed.

I refuse to play either of these armies. BriP!