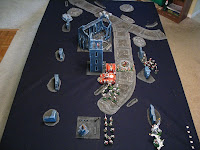 C.'s looking to start playing the Witch Hunters now, so we had a little 1500 point match-up this weekend for her to try them out. She had 1 cannoness, 1 callidus assassin, 1 inquisitor, 7 repentia with mistress and priest, 2 x 10 battle sisters, 10 seraphim, an exorcist, an immolator, and two penitent engines. Wolves had 1 wolf guard battle leader, 1 rune priest with terminator bodyguard in a drop pod, 4 wolf scouts, 2 x 7 grey hunters led by a wolf guard in a drop pod, 8 blood claws led by a wolf guard in a rhino, and a vindicator. 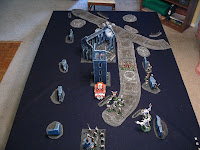 Witch Hunters: The penitent engines are irritated at starting the game off in the rear and they roll for holy rage and sprint forward a bit. One of the battle sister squads settles into the area around the statue in their adjacent quarter and the tanks also swing wide into the same quarter.

Space Wolves: The Vindicator pulls up even with the rhino as it turns a bit itself, trying to get in position for the blood claws to hop out next turn. 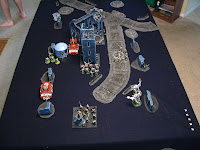 Witch Hunters: The repentia, urged on by their mistress's neural whips, roll for holy rage and charge forward another full 6" to make contact with the wolves' rhino. As they lay into it with their savage eviscerators, the rhino explodes and four are killed. The battle leader, wolf guard, and blood claws are entangled in the smoking crater left by their destroyed transport. The witch hunters tanks swing further out.

Space Wolves: The terminators decide to come in a bit early and their drop pod deep strikes next to the seraphim. Luck turns a cold shoulder and only one of the flying nuns is destroyed by their sizeable wave of plasma and assault fire. Even worse, one of the plasma guns overheats and kills its bearer. Lesson: don't mess with the daughters of the emperor. The rune priest does his best to call up a blizzard and give his squad a little cover. The vindicator flips a huey and hauls back to its former position. 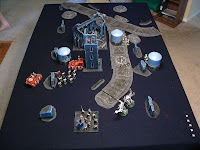 Witch Hunters: The seraphim use divine guidance to wipe out the terminators in righteous flame and bolter fire, blizzard be damned. The callidus assassin slinks out of her hiding place in the ruined chapel and charges toward the pinned blood claws, killing four immediately with her neural shredder and laying down four more in close combat. The repentia and mistress also charge into the blood claws and battle leader, but without frags they are destroyed before they can do any damage. A blood claw armed with a powerfist manages to destroy the assassin in the end.

Space Wolves: Both squads of grey hunters and the wolf scouts arrive on the table, killing five battle sisters with their opening salvoes of bolter and plasma fire. The machine spirits of the grey hunter drop pods target the aged inquisitor and manage to kill him with their storm bolters. Another plasma gunner is overcome by a weapon misfire. The battle leader and blood claws stagger away from their rhino crater and take cover in the chapel ruins.
Turn 4 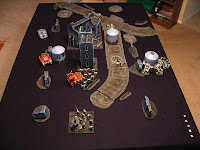 Witch Hunters: The battle sisters shoot up the grey hunters, killing three of them and forcing them to fall back. The pentitent engines get holy rage again and charge into the closest drop pod. They try in vain to make it explode, leaving it a hulking wreck that the grey hunters can still hide behind.

Space Wolves: The grey hunters and wolf scouts move around the side of the destroyed drop pod and bring down one of the penitent engines with plasma shots. The other grey hunters regroup, and the vindicator pulls wide to threaten the immolator. 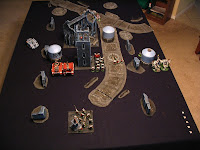 Witch Hunters: The last penitent engine charges the grey hunters in holy rage and kills three of them. The powerfists are unable to hit him back. The seraphim move closer to the middle of the table, and the immolator moves next to the exorcist and fires off its smoke launchers for a little extra protection. The exorcist shoots one of the blood claws in the chapel.

Space Wolves: The battle leader and last couple of blood claws move back away from the enemy armor. The vindicator fires its demolisher cannon at the immolator, shaking it. The scouts try to kill just one battle sister and bring their squad below 50% but cannot make it happen. The penitent engine puts down two more grey hunters. 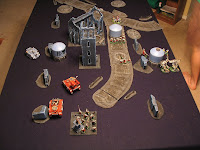 Witch Hunters: The exorcist takes one last shot at the vindicator, but even with 6 shots is unable to do any damage. The seraphim fly over next to a drop pod in an attempt to straddle the two quarters. The penitent engine kills another two grey hunters, leaving only the powerfist troopers who are unable to return the favor, only shaking it. They break and flee from the crazed walker.

Space Wolves: The vindicator finishes the duel of the tanks by shaking and destroying the main weapon of the exorcist. One squad of grey hunters kill one of seraphim and the other one shoots at the cannoness but can't pierce her 2+ save.