I cut out frames for a bunch of foamboard buildings back when the Cities of Death codex came out, but I got caught in the thick of a thesis and tossed them all up in the attic for a long while. Now that the scholarly business is for the most part behind me, I'm trying to finish at least a few of the pieces before our little upcoming tournament. I got some hardboard this weekend and cut it into 12x12" pieces, cutting one down further into four 6x6" squares. I mounted several of the buildings with nails and glue. These buildings represent the skeletal remains of a once thriving city now reduced to rubble, ruins fortified with scrap for the valiant last stands of their former residents, structurally suspect but nonetheless valuable real estate in a constantly shifting warzone. I'm still going to be adding litte bits and whatnot before the final paintjob, not to mention basing them with gravel and rubble. 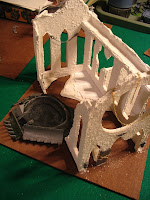 The first is a chapel, devastated by heavy ordnance but girded with the remnants of battle and defended to the death. The top ledge is accessible only to the most agile infantry but provides a heck of a view. That crater there is just a placeholder until I get some more modeling clay and make another. I dug mine out of the bin today and it was all dried up. 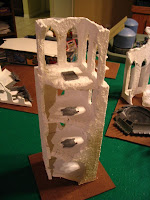 The second is a tower, now open to new occupants after one entire corner was taken apart by big guns. It's a wonder it's still standing. 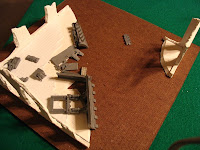 This third one will be a former building bisected by a well-used tank detour. I'm going to lay down a bunch of track imprints in some putty or clay. One side will be well fortified and feature the leavings of a small imperial campsite. 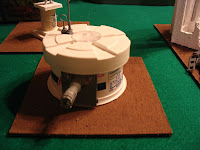 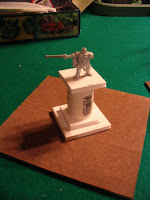 These are two smaller pieces, one a burnt out gun emplacement, the other the battered statue of a forgotten hero. I'm eventually going to put a circle of razor wire around the statue to memorialize the time when statues such as these were being defaced by crazed mobs, stirred to acts of vandalism and heresy by their selfish dissatisfaction with imperial citizenship.
Posted by bullymike at 10:27 PM