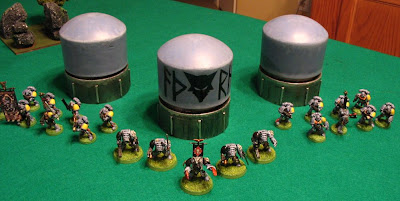 Here's the drop-pod contingent from my Space Wolves army. Lately I've heard various rumors about plastic drop pod kits to be released in coordination with some kind of 40k variant based on extra large games. But I got impatient some time last year and built three based on tips found here. I would probably still buy a plastic pod kit, assuming they look like the ones on this Forge World page. The best thing about drop pods is that they won't ever be destroyed by scattering on terrain or other units. The second-best thing is how they create instant cover for the passengers and can change the firing lanes of the battlefield suddenly and significantly. Sure, they can be destroyed pretty easily but most folks are more concerned with the squads that just disembarked - in my case, a Wolf Guard terminators or Grey Hunters.

I recently bought some medium bases and switched all the bases out on my Space Wolf and Chaos terminators. I think it makes the models look larger and more imposing, even though the actual models of the new plastic terminators are still a bit larger.
Posted by bullymike at 7:37 PM