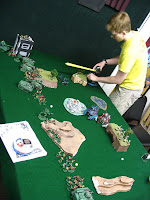 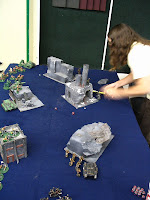 Me and C2 played in the Dragon's Lair tournament yesterday. Attendance was terrible and only two other people showed up, so with three rounds scheduled, each of us had a turn to play one another. I brought my same guard army from last time (light infantry, bunch of tanks), C2 brought her usual 2k chaos force, another gent played iron warriors, and the last guy had a gravtank-heavy Eldar force. I think each of the armies was reasonably constructed and the games were all friendly and gracious. There were no total routs except for the games against Eldar. I know they wiped me out entirely, maybe save one chimera, and C2's chaos didn't fare too well against them either. I defeated C2, which was really for me the highlight; that demon prince usually fucks me up pretty good, but after I shot him a couple of times, a single guardsman clocked him in the chin and took him out of the game, sealing up the win. The Eldar player went home with 1st prize, winning all 3 of his games. Everyone else won once and lost twice. 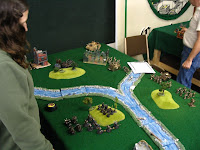 I learned at least a couple of lessons. The game against C2 was the only win, and really the whole thing hinged on my left side, which, unlike the right side, was deployed close to my table edge. The right side had some good kills but they got run out real quick by the possessed, berzerkers, and bloodletters. When I deploy up near the line, I do badly. Period. I was doing it out of fear that I wouldn't have any good firing lanes first turn, but that's really a moot point considering my second lesson learned: forget choosing a side or going first with Guard in any tournament using strategy rating to determine order of placement and first turn. One die is crap. Against the Iron Warriors, I should have turtled in one of my corners rather than spread myself out along the whole long edge. Against the Eldar, I learned that if I get encircled by grav tanks it's over fairly quickly. Both games I think backing up a little would have helped me keep my lines free from falcon and wave serpent invasion. But who knows.
Posted by bullymike at 7:30 AM

Howdy there Mike. Seemed like a fun tourney from what I saw of it. I think you should post up some full army shots of each of your forces(the painted ones at least), I would really like to see it.

I will be working on it. We cleaned off our game table at home to have a party, but once I get that stuff back out for a decent backdrop, plus figure a few more things out my camera, I'll have some high quality pics up soon. Instead of cheesy links to the GW pages for my armies in the sidebar I'll link to pics and lists.

If you come back and read this, which do you think is better: 5 ratlings, which i was using last saturday, or a third sentinel with a lascannon? same cost, but i would need to buy the sentinel model. at least the catachan style is cheapest... and i already have a third lascannon from weapons teams leftovers. the ratlings are nice but like i was saying in this post, i have more trouble with vehicle-heavy lists than infantry.

I think another Sentinel would almost certainly be more useful than the Ratlings. The thing about lascannon Sentinels is that the enemy will likely ignore them, at least for a few turns, so they can get some uncontested shots. Also the scout move can be really useful.